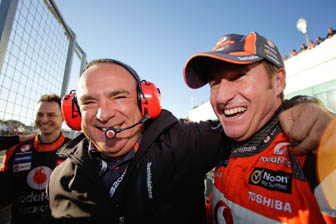 TeamVodafone boss Roland Dane says that Mark Skaife’s decision not to announce his retirement is the right one.

Skaife, who won yesterday’s L&H 500 Phillip Island with Craig Lowndes, will take on his new role as V8 Supercars’ Chief Commissioner after Bathurst.

Under the rules created for the position, Skaife will not be able to compete in a V8 Supercars race.

Team boss Dane says that Skaife’s decision not to retire – despite his impending position on the commission and pressure from the media – is the right one.

“I think it’s the right call for him not to announce his retirement. Who knows what’s around the corner?” Dane told Speedcafe.com.

“Why should he retire? He doesn’t know what he is going to be doing in two or three years time.

Dane also said that if Skaife does become available again in the future, he will consider him as an endurance driver.

“You can see from his performance this weekend (at Phillip Island), that he shouldn’t have retired at the end of 2008,” Dane said.

“If he is available at some point in the future, then I’d certainly consider having him in the team.

“I’d consider him, look at the options and work out if he could get enough running to get up to speed, but you’d have to look at it at the time. There’s no point speculating the ifs and maybes.”