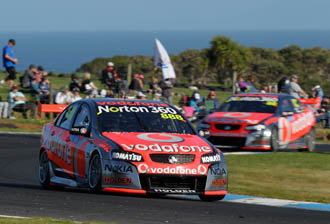 “It’s been a pretty smooth weekend for us as a team – everything we did to the car it responded to,” said Lowndes after the race.

“It’s been a big effort from the team all through this year, not just this weekend. The team have presented both cars immaculately, they’re reliable, they’re fast and this weekend has been no different.

“We were very methodical about what we did and it’s proved that it’s worked out.”

Having come out on top of a spirited battle with Garth Tander early in the final stint, Lowndes was then forced to withstand a concerted effort from Shane van Gisbergen’s SP Tools Racing Falcon.

The 23-year-old Kiwi closed to within 3.5s of the race leader before suffering a right-front tyre issue with seven laps to go.

“When Shane was closing that gap I radioed in and said I didn’t want to go any faster and burn the tyres and have nothing left to fight if he got to us,” said Lowndes.

“He got to about three seconds away but must have had a problem and went backwards as fast as he came up to me. It was a blessing for me, we were pushing as hard as we could.”

After scoring a similar one-two result in last year’s Supercheap Auto Bathurst 1000, Skaife underlined the enormity of the team’s achievement.

“To get it in perspective, the series is so competitive and run to such a high level – to have a one-two at any stage is just an unbelievable achievement and obviously the team is operating very well,” he said.

After surviving minor contact from Skaife on the opening lap, the Queenslander was pleased with his result – thanking the key men from TeamVodafone after the race.

“I wouldn’t have been able to do it without the whole team backing me – Jamie, Dutto, Roland and Adrian took  a punt on me to put me where I am,” said Thompson.

“I gave it everything I could and ended up second. There’s still a job to do at Bathurst now, and hopefully we can get Skaifey and Lowndes there.”

“We like to pick up has-beens from that team,” said TeamVodafone principal Roland Dane of Thompson’s rise.