Van Gisbergen had pressured Lowndes throughout the final stint – closing the margin to his Holden rival down to 3.5s with 10 laps remaining.

It was not to be for van Gisbergen however, as a right-front tyre issue saw the Kiwi quickly fall away, before losing position to Whincup, Will Davison (Trading Post Racing) and Garth Tander (Toll Holden Racing Team) across the final two laps.

Despite co-driver Nick Percat having to start the #2 HRT entry from pitlane after stalling on the grid, Tander led the race at the beginning of the final stint, but could not match the pace of his rivals across the closing 30 laps. 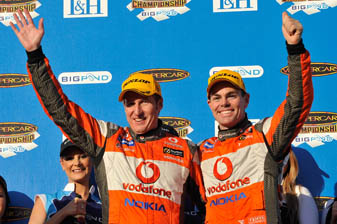 Percat’s error forced an aborted start, and left Luke Youlden to take a comfortable lead once the event finally got underway.

John McIntyre (SP Tools Racing) and Dean Canto (The Bottle-O Racing) ran second and third respectively in the opening laps, before Thompson and Skaife – who made minor contact with each other at Turn 4 on Lap 1 – eased their way towards the front.

Skaife resumed in the effective lead once Thompson pitted seven laps later, but was then powerless to stop his younger team-mate’s grip advantage in the second stint.

Thompson had the lead out to 4s over Skaife before the second round of stops, with Youlden a further 14s back in third – who in turn was being hounded by a determined Percat.

As the co-drivers all exited the leading cars between Laps 47 and 49, the race was effectively re-set with Lowndes 3s in-front of team-mate Whincup – the #88 car having lost time in the driver change due to the Skaife-induced driver’s door damage.

The gap remained stagnant at the front until a pair of Cape Barren Geese appeared at Turn 4 on Lap 64 – bringing out the race’s one and only Safety Car period.

With almost the entire field taking the opportunity to pit, Whincup’s chances again suffered as he was forced to queue behind Lowndes.

Lowndes set the fastest lap of the race to date on the re-start lap, but quickly found himself under pressure from Tander, who eventually found his way by with a sensational inside pass at Turn 1 on Lap 76.

The factory Holden driver then instigated the final round of stops when he dived for the pitlane on Lap 79, after which point the race took his final turn.

Having run just two new (rear) tyres in the fourth stint, Lowndes’ car was transformed after the final stop, pressuring Tander for four laps before taking the lead for good at MG Corner.

Van Gisbergen proved a surprise contender in the closing stages. Running 30s behind Lowndes at the midpoint of the race, the Stone Brothers Falcon gained greatly from the mid-race Safety Car, and proved the most tyre efficient car as the race progressed.

Slotting into the pack fourth – between a dicing Whincup and Will Davison – after his last stop, van Gisbergen made it to second place by Lap 97, before tyre issues significantly blunted his charge over the final eight laps.

Tander beat van Gisbergen to the line by just 0.0015s, despite having fallen off the road at Turn 4 on Lap 106, allowing Will Davison through to an eventual third.

Reynolds held on for sixth ahead of a charging Jason Bright – whose race was severely hampered by an drive-through-penalty for co-driver Andrew Jones after an early hit on Steven Richards (Orrcon Steel FPR).

The V8 Supercars Championship continues with the Supercheap Auto Bathurst 1000 on October 6-9.

See below for the full L&H 500 result