L&H 500 Saturday format to be reviewed

L&H 500 Saturday format to be reviewed 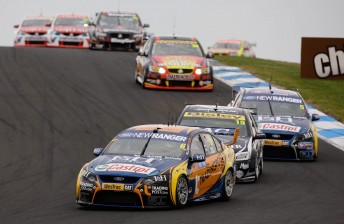 The Saturday format of Phillip Island’s L&H 500 will be reviewed prior to next year’s V8 Supercars Championship.

The unique format, which sees six on-track V8 Supercars sessions held on the one day, was designed to increase the track action for Saturday fans.

The process of holding two qualifying sessions and two qualifying races has remained the same since V8 Supercars’ pre-Bathurst 500km event was first held at the Island track in 2008.

The Saturday sessions have attracted a range of mixed opinions up and down pit lane.

“We will review the Phillip Island format for next year,” Perry told Speedcafe.com.

“You’ve got to try these things sometimes. I hear from different people that it’s a bit confusing with how it all works.

“You could say ‘it’s just different’ – we still end up with a 500km race, but the way we get there is a little bit different. I don’t think it’s such a bad thing.

“It’s a little bit hard to explain to the average punter, and if that’s the major complaint, so we’ll look at it and see what we can do.

“I think there was a reasonable crowd yesterday. Is that justification for the format? Hard to say.

“We’ll definitely review the format – and the format of all races next year. We’re about to start that process now.”

Fujitsu Racing team owner Garry Rogers is one of the most vocal critics of the current format.

“If we just run a normal practice, qualifying type scenario, we’d have the same crowd. I don’t see the need to supplement this to draw a crowd. I think the crowd will come anyway.

“There’s a lot more track time, and obviously there’s a maintainance factor, tyres and all the things that increase the cost.

“I don’t see the need to have the racing on Saturday.”

Two-time winner of the Phillip Island 500, Garth Tander (Toll Holden Racing Team), admits that track time places a huge workload on the teams, but sees its merits in parts.

“It’s busy, and it’s a busy day for the teams,” said Tander.

“It’s the fourth time that they’ve run this format, so the teams are starting to get their head around it.

“Whether or not the people at home or the people at the side of the track can follow what’s going on, with the pit stops across the races … Is it working well enough?

“Really, all we’re doing is mucking around until we get racing.

“The good thing is that there’s plenty of Supercars on the track all day, so people coming down on the side of the track get plenty of action.”

CLICK HERE for a news video regarding Tony D’Alberto’s illness and his team’s late driver replacement.