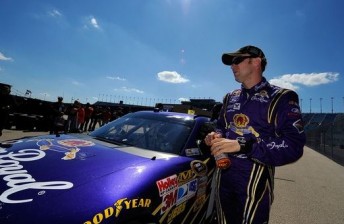 Roush Ford driver Matt Kenseth has kicked off his Chase for the Sprint Cup campaign by scoring pole position at Chicagoland.

“We had a great (turn) one and two…  I just got tight off of four and started to shake the tires,” said Ambrose of his lap.

“I don’t know, we were close. I think with another quarter pound of tire pressure we might have had something.”