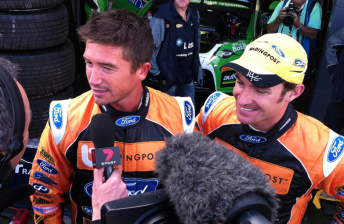 Harry Kewell and Will Davison at Phillip Island this morning

The new A-League Melbourne Victory recruit was taken for a lap of the Phillip Island circuit with today’s L&H 500 pole-sitter Will Davison in the #6 Trading Post Racing Falocn FG.

Kewell has become an official partner of Ford Australia and the face of Ford Performance Vehicles.

After spending all of his professional soccer playing career in Europe, Kewell says that being at the Phillip Island race circuit, in a V8 Supercar, made him feel right back at home.

“I feels like I’m back home now,” Kewell said.

“Everyone here has been perfect and I really appreciate everything they’ve done.”

Kewell was amazed at Davison’s skill in his Ford Performance Racing Falcon around the Island circuit.

“I thought I had quick feet, I saw what he was doing,” Kewell said.

“He says he has no skill on the ground, but I reckon he would.”

FPV General Manager Rod Barrett was pleased to confirm the deal with Kewell.

“Bringing FPV and Harry Kewell together, we have created a relationship between two of Australia’s high performing sports brands and this was a natural choice for both,” he said.

“Ford and FPV are incredibly excited to confirm our partnership with Harry as we continue to grow the FPV brand.”