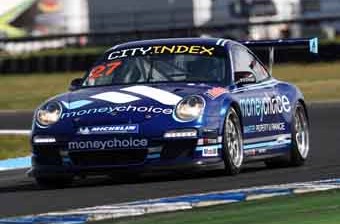 Daniel Gaunt has scored his second Porsche City Index Carrera Cup Australia round win for the season at Phillip Island this weekend.

After Gaunt’s Race 1 win on Saturday, the New Zealander looked to have sealed his fifth straight win in the championship in Sunday’s Race 2 on his approach to the chequered flag.

However, Gaunt experienced fuel surges in the final seconds of the race, which allowed countryman Craig Baird to take a surprise victory. CLICK HERE for Speedcafe.com’s race report.

Baird’s hopes for a second consecutive race win ended when he received a drive through penalty for jumping the start of Race 3. Baird’s penalty allowed Gaunt to move to the lead and eventually claim the race and round win.

Reid finished second in Race 3, which placed him runner-up for the round, with Baird eventually claiming third for the round after recovering to finish 11th in the final race.

After failing to finish the opening race of the weekend with a broken drive belt, Patrizi finished third in Race 3 ahead of Richards, Barker, Twigg, Coleman, Flack, Paul Kelly and Gray in 10th.

Gaunt was pleased with his second straight round win.

“I couldn’t really have asked for a better weekend,” Gaunt said.

“A bit more fuel would have been good in Race 2; but we win as a team, we lose as a team.

“Baird was really unlucky there in the last race; the penalty doesn’t really suit the crime – but that motorsport and we all race by the same rules. Otherwise, it would have been a good race because he would have been hard to beat.

“We’ve won Townsville and now Phillip Island so hopefully we can keep this momentum going for Bathurst and be somewhere towards the front by the end of the year.”

Max Twigg took the Elite Class round win for the Phillip Island event ahead of Flack, Koundouris, Gray and Kelly, with Twigg happy to be the first Elite Class driver to win two rounds of the season.

Twigg remains at the lead of the Elite Class standings ahead of James Koundouris, Flack, Theo Koundouris and Kelly.

The next round of the Porsche City Index Carrera Cup Australia will be held at the Supercheap Auto Bathurst 1000 on October 6-9.