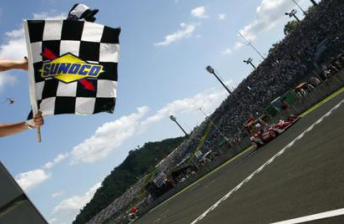 Scott Dixon crosses the line to win in Japan

Scott Dixon has taken victory in the Indy Japan, while second placed Will Power took the championship lead with two rounds remaining.

While Power leaves Japan with the title lead and the Andretti Trophy, his championship rival Dario Franchitti was not so fortunate. Franchitti carried a five-point leader over Power into the 63-lap race, but he could only manage ninth after he made contact with the right-rear of the Team Penske’s Ryan Briscoe entering Turn 1.

Power’s 11th top-five finish of the season bumped his point total to 542, which is 13 points ahead of Franchitti. Dixon is 60 points behind Power heading into the final two races – both on 1.5-mile ovals.

Dixon’s win keeps him in the title hunt. It was Dixon’s 27th Indy car victory, breaking a tie with Rodger Ward and tying Johnny Rutherford for 11th on the all-time list.