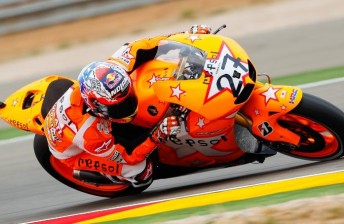 Casey Stoner has taken his eighth win of the 2011 MotoGP World Championship at Aragon in Spain.

The Australian dominated the race – leading every lap despite falling to third at the first corner after narrowly avoiding a collision with team-mate Dani Pedrosa.

Stoner’s eventual winning margin over the Spaniard was 8.2s, while Yamaha’s Jorge Lorenzo was a further six seconds back in third.

Lorenzo was visibly pleased with his performance, having struggled to fourth on the grid yesterday.

Having run fifth in the early stages, the Spaniard benefited from a Marco Simoncelli mistake to move into fourth with 14 laps to go, before eventually finding a way past team-mate Ben Spies to take the final podium spot.

Having started from the pitlane, Rossi fought hard during the race, eventually getting the better of Hiroshi Aoyama on the final lap in a spirited battle for 10th.

It was a tough day for Repsol Honda’s third rider, Andrea Dovizioso, who joined Karel Abraham and Randy de Puniet by crashing in the opening corners.

Loris Capirossi and Toni Ellias also made spectacular exits, with the veteran running into the rear of the reigning Moto2 World Champion’s Honda – sending both riders into the gravel trap.

Stoner now leads the championship standings by 44 points from Lorenzo with just four of the 18 races remaining.