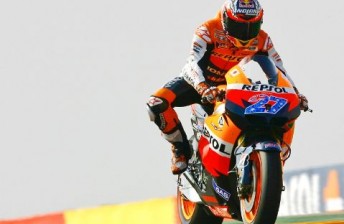 Casey Stoner has taken pole position for the Gran Premio de Aragon despite crashing in the 60 minute qualifying session.

Having mounted his spare bike, Stoner set the session’s best time of 1:48.45s inside the final two minutes – lowering his previous effort by 0.2s to cement pole.

Team-mate Dani Pedrosa ended the session second fastest, having run a 1:48.75s on his penultimate lap before running off the circuit on his final flyer.

Factory Yamaha riders Ben Spies and Jorge Lorenzo will start third and fourth, while Andrea Dovizioso rounded out the top five on the third Repsol Honda.

After the conclusion of the session, Stoner put his crash down to an unexpected amount of grip from the soft tyre.

“At the end of the session we put on the soft tyre and on the first lap I was a little too cautious in Turn 1 as I wasn’t sure if the tyres were warm enough,” said Stoner.

Then I pushed on the second lap and I had a lot more grip than I expected so I went through the corner much faster and I wasn’t able to slow down, I pulled the bike up but it was difficult to reduce the speed and I ended up needing to lay the bike down to avoid the wall.

“Unfortunately, I wasn’t able to restart the bike which is a shame as I was happier on that one, but even on the second bike we were able to improve our time.

“Now we need to see what the weather brings for tomorrow but we’re feeling good and I hope for a good race.”

Marco Simoncelli (Gresini Honda), Nicky Hayden (Ducati), Karel Abraham (Cardion Ducati), Hiroshi Aoyama (Gresini Honda) and Randy de Puniet (Pramac Ducati) will fill sixth through 10th on the grid, while Valentino Rossi (Ducati), who qualified 13th, will start from pitlane having elected to use a seventh engine for the season.