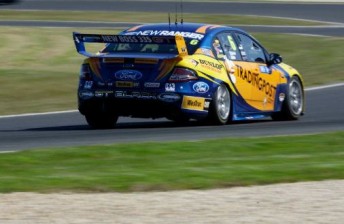 Will Davison led from start to finish

Will Davison has taken a lights-to-flag victory in the Driver A Qualifying Race at Phillip Island.

With fellow front-row start Craig Lowndes (TeamVodafone) making a poor star, Davison shot from pole position to lead Andrew Thompson (TeamVodafone) by 1.3s at the end of the opening lap.

The Trading Post Falcon went on to win the 14 lap event by 2.7s from Garth Tander (Toll Holden Racing Team), who made his way around Thompson at Turn 4 on Lap 5.

David Reynolds (Stratco Racing) led home Todd Kelly (Jack Daniel’s Racing) for fourth, while Lowndes recovered to sixth, despite running as low as ninth at the completion of the opening lap.

The dice between Reynolds and Kelly provided the biggest entertainment of the race, with the Braeside based Commodores making minor contact at the exit of MG Corner on Lap 5 as the team boss tried to make his way by.

With each car required to make a Compulsory Pit Stop in one of today’s two Qualifying Races, 11 drivers pitted in the opening encounter.

Cameron McConville (Toll Holden Racing Team) finished as the highest of those to pit in 18th position – one ahead of Kiwi John McIntyre (SP Tools Falcon).

Jack Perkins had a tough run in the Supercheap Auto Commodore – finishing 25th after an off at Turn 1 on Lap 4.

Taz Douglas, substituting for the ill Tony D’Alberto in the Wilson Security Falcon, was 26th.

While Dean Canto finished 21st in the race, the #55 Falcon crew is currently making a precautionary engine change prior to Qualifying Race B.

See below for the full Driver A Qualifying Race 1 result