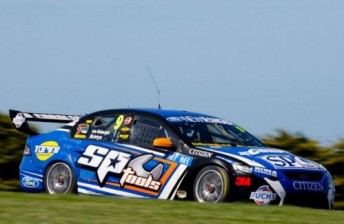 The SP Tools backed driver took the lead at the start from the front row of the grid, and was never headed across the 14 laps.

With his closest pursuers Jamie Whincup and Mark Skaife (TeamVodafone) both needing to make their Compulsory Pit Stop during the second race, van Gisbergen cruised to a 9.2s second victory over Paul Dumbrell.

See below for the full Driver B Qualifying Race result