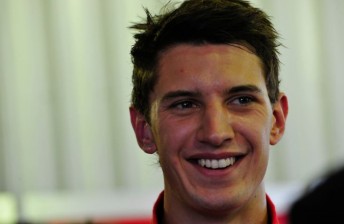 The Toll Holden Racing Team pair will start the weekend’s big race from second on the grid – alongside the Trading Post Falcon of Will Davison and Luke Youlden.

Tander finished second in his qualifying race this afternoon, while Percat was 14th – the third car to have made a pitstop – in the second 60km encounter.

Earlier in the day, Percat set the fourth fastest time in the 20 minute Driver B qualifying session.

“The way he handled himself in that race against guys like Jamie (Whincup) and Mark Skaife, who have been doing it forever, was a fantastic effort.

“It puts us in a fantastic spot for tomorrow, starting second, and I’m looking forward to the race.

“We’ll try some more things in the morning (warm-up) and head into the race pretty happy with where we are.”

Percat, who is a regular for Walkinshaw Racing in the Fujitsu V8 Supercars Series, is making just his second ever V8 Supercars Championship event start this weekend.

When asked of the pressure associated with driving for Holden’s factory team, Percat explained that driving alongside Tander is helping his development process.

“Of course there’s some pressure, but when you’re working with someone like Garth it makes it easier rather than harder,” said Percat of driving with Tander.

“I’d rather be in this position than have a co-driver that isn’t perhaps as up to scratch as he is.

“Everything the team and Garth tell me I take on board and put it into practice on the track, and today has shown that we can get decent results.”