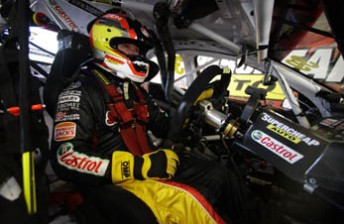 Russell Ingall will not drive for Paul Morris Motorsports beyond this season, team owner Paul Morris has confirmed.

Ingall, who enjoys personal backing from automotive retailer Supercheap Auto, has been heavily linked to the third seat at Walkinshaw Racing next year.

Speedcafe.com spoke to Ingall at Phillip Island, where the 2005 V8 Supercars Champion confirmed that he will not drive for PMM next year, but refused to comment further.

After four years together, Morris says that the split with Ingall is amicable.

“Russell won’t be with us next year, and that’s been decided,” Morris told Speedcafe.com.

“It’s not a messy divorce. It’s just a situation that has come to hand that neither of us are getting the results. Something needs to be changed, and that’s what’s happening.”

The future of Paul Morris Motorsports has also been in question in recent times, with Morris stating that he is considering offers of selling all or part of his operations.

When asked on an update on his team’s future, Morris only spoke of his desire to continue unchanged and says that he wants to replace Ingall with a young driver, nominating leading Fujitsu V8 Series driver David Russell as a fitting candidate.

“David Russell is in our sights. I like the way he drives, the way he presents himself and I think we can build something around him.”

Russell is partnering Todd Kelly in the #7 Jack Daniel’s Racing Commodore at Phillip Island this weekend.

See below for Speedcafe.com’s exclusive video from Phillip Island.