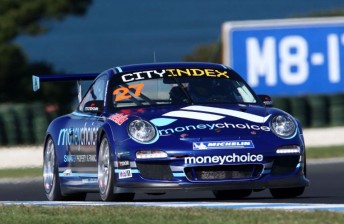 Daniel Gaunt made it four wins on the trot

Daniel Gaunt has continued his run of race wins in the Porsche City Index Carrera Cup Australia by taking victory in the opening race at Phillip Island.

After scoring all three race wins at the last round in Townsville, Gaunt passed pole-sitter Jonny Reid for the lead on Lap 3 of today’s 12 lap race before pulling away from his fellow New Zealander.

Gaunt went on to win by just 0.5s from Craig Baird, who also made his way past Reid’s Simjen entry. Reid ended the race third, from Ben Barker and Steven Richards.

Michael Patrizi battled with Barker during the race before the West Australian was forced to retire with a mechanical failure.

Two Carrera Cup races will take place at Phillip Island tomorrow, with Race 2 of the weekend set to kick off at 9:45.