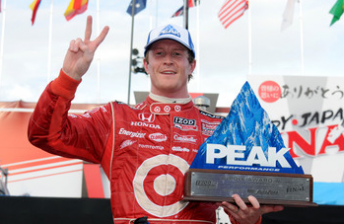 The Kiwi’s pole means that he has now scored pole positions on both Twin Ring Motegi oval and road course.

Dixon, driving the Target Chip Ganassi Racing car, posted a best lap of 1m38.3918s on the 2.983-mile, 14-turn circuit to claim the PEAK Performance Pole Award presented by AutoZone for the Indy Japan.

Dixon, who will compete with Stone Brothers Racing in the Armor All Gold Coast 600 in October, says that he was lucky to get the pole, considering a lack of pace in the final sector.

“It was a bit frustrating but we just got it. We’re on the pole and that’s what counts. It feels very special to be on the pole for the last race here at Motegi.”

It was the 17th pole of Dixon’s Indy car career, tying Emerson Fittipaldi for 18th on the all-time list.

Graham Rahal and Briscoe will share Row 2 and James Hinchcliffe and Helio Castroneves will occupy Row 3.