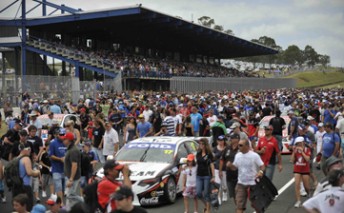 V8 Supercars will wait until its 2012 calendar is finalised before making a decision on returning to Eastern Creek for a pre-season test.

In January, V8 Supercars held a free-to–the-public test event at the western Sydney circuit, attended by more than 10,000 punters.

The test counted as one of the team’s six official test days.

While the event was largely applauded by fans and teams, there is no confirmation yet if the test will be repeated prior to the 2012 season.

V8 Supercars chairman Tony Cochrane says that his priority is to lock in next year’s calendar before committing to the Eastern Creek pre-season test.

“I don’t believe we’ve formed a view for that next year,” Cochrane told Speedcafe.com.

“As of right now, we haven’t formalised our calendar for next year, so until the calendar is formalised, I don’t think we could have that discussion with Eastern Creek.

“Certainly once the calendar is formalise, I’d only be too happy to open up that dialogue with Eastern Creek about hosting a test day, if the opportunity presented itself.”

Cochrane says that he expects the calendar to be ratified in the coming weeks and confirmed over the Supercheap Auto Bathurst 1000 weekend (October 6-9).

“There are two or three very important parts that are still up in the air,” Cochrane said.

“By and large, they are beyond our control. The F1 calendar was only formalised last week, so that has enabled us to lock in dates and times that we can work around.

“At this stage, we will probably release the calendar at Bathurst.”