Lydon Dodge not eyeing off the prize…yet

Lydon Dodge not eyeing off the prize…yet 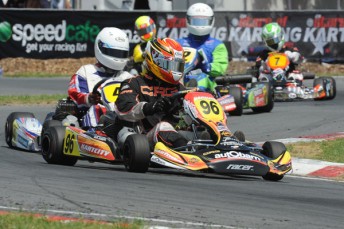 Cairns driver Lydon Dodge is leading the way in the Clubman category entering next month's final round of the Yamaha Challenge. Pic: AF Images/Budd

Entering the previous round of the Yamaha Challenge, run in conjunction with the CIK Stars of Karting Series, Lydon Dodge was the runaway leader in the Clubman category.

However, when he failed to finish the main event in round four he saw his buffer over Aaron Borg diminish to a mere eight points. Dodge’s DNF has also brought his CRG team-mate Brett Robinson into contention for the major prize of representing Australia in the All Japan Championships later this year.

While many drivers would consider having a championship lead cut by 42 points as a huge set back, Dodge believes that it could be a ‘blessing in disguise’ to ensure that he didn’t get ahead of himself as he aims to secure the biggest prize of his career.

“All year I’ve been simply trying to take one round at a time and going into the last round with a 50 point lead I may have started to get ahead of myself with people talking to me about what would happen when I won,” said Dodge.

“I’m trying to keep it all out of my head and now being only eight points in front could actually be a godsend, as I won’t have people saying I’ve got it in the bag. I really have to focus and work for it if I’m going to win.”

The rescheduling of the final round is also something that the Cairns driver believes will play into his favour.

“The last round was just one of those weekend’s were simply nothing went right, I just couldn’t get the kart to react the way that I wanted to and then I crashed out in the final heat and again in the final – it was a disaster,” said Dodge.

“It was a weekend that I think I’d rather forget but the best thing is I’m still in the lead and still have the opportunity to win. Now, with the New South Wales State Championships at Newcastle two weeks before the final round of the series I’ll be using that event as a very intense testing session for the Yamaha Challenge.”

The fifth, and final, round of the CIK Stars of Karting Series presented by Castrol EDGE will be hosted by the North Shore Kart Club at the Mt Sugarloaf Raceway in Newcastle on October 15/16.

An hour-long television package, focusing on the championship decider, will be broadcast on SPEED (Foxtel 505) later this year.