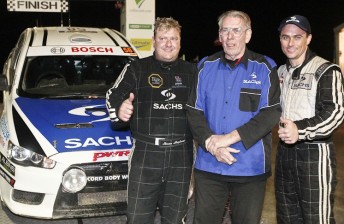 George Shepheard was in Coffs Harbour when his son Steve took out his first ARC event CLICK HERE, the win added to the impressive history of the Shepheard family.

George Shepheard partnered V8 legend Colin Bond to four ARC championships, he has won numerous Queensland State titles, his last in 2003, he managed the General Motors Holden (GMH) Rally programme, he built championship winning cars for Dick Johnson, Bob Morris drove his car to second at Bathurst in 1981 and he has competed in some of the world’s great Rally events. Add to this, stints with Mitsubishi and Volvo and working with drivers like Peter Brock, Shepheard has experienced a lot over the decades.

George’s father Reginald created the REDeX Round Australia Trial in 1953 and since then he has never been away from the sport that he loves.

“It all started when I was very young because my father Reginald was the owner of a company called REDeX and he started the Round Australia Trial,” George Shepheard explained to Speedcafe.com.

“Dad was also the owner of Jack Brabham’s original Cooper Bristol and helped finance him to go to England.

“It was all very natural that I was tied up in it all.”

Shepheard got his CAMS licence to race in 1959 and was immediately involved in rally events, teaming up with good mate Colin Bond.

“At school Colin Bond and I were in the same class, we were mates,” said Shepheard.

“We used to see each other at the race tracks, then we got involved together with the MG car club of New South Wales and started rallying, sprinting, hill climbing, anything you could do on four wheels.

“In 1964 we decided we’d do the Round Australia Trial in a Vee-dub beetle.

“We had a win in the ‘first home under 25 years old’ category. 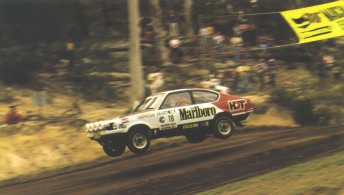 “That’s how we got going in the sport.”

Having won several National and State Rally titles, General Motors contacted Shepheard to prepare cars for its first foray in the Round Australia Trial.

“Colin went professional and I had a business building roll bars and exporting them to Japan when I got the offer from GMH to develop and build the cars for the 1979 Round Australia Trial,” said Shepheard.

“This was instigated by (Peter) Brock and myself, we wanted to show off the new Holden.

“Brock was ripping around Lang Lang at the time and he said ‘you know what, we should talk them (GMH) into entering the Round Australia Trial’, which I thought was a bloody good idea.

“I was allocated to the job; I took over the whole programme.

“I was told I couldn’t compete though, which was first for me.

“I was team manger, development engineer, and we were fortunate and clever enough to get a one, two, three result in the event.”

Shepheard continued to race and maintained a relationship with Holden even though Bond had long left the manufacturer to race with Ford.

“My association with Holden remained after Colin split in 1976,” said Shepheard.

“I continued to build the rolling chassis of their race cars; the roll cage, then Harry (Firth) would build them and run them in the race team.

“We were also given an old race car, one that had been racing for 12 months or so, which we would turn into a rally car so we could go racing.”

“I built a little twin cam Gemini double Z, it was a model that didn’t come to Australia,” said Shepheard.

“It was a very successful little car, Bob Morris was a good friend of mine and he drove it. The stars of Holden's 1979 Round Australia Trial - including Peter Brock

“Bob asked me to then build a Falcon for him to race at Bathurst. I said ‘Christ I wouldn’t know what to do’ to which he replied, ‘don’t worry, you’ll work it out’.

“Anyhow, we built it and had it entered into one race before going to Bathurst; it was the Oran Park long distance race, which we won.

“At Bathurst (in 1981) Bob qualified it on the second row of the grid but the car was involved in the monumental accident at the top of the hill which stopped the race.

“Dick (Johnson) won it and Bob came second even though the car was a wreck.”

Following this, Shepheard got a job working for Dick Johnson.

“I was offered a job to manage Dick’s team,” said Shepheard.

“He’s a great bloke, a fabulous driver, but I only stayed a little while.”

After leaving DJR he was snapped up quickly by Mitsubishi Japan, running its Starion racing programme. Shepheard developed the cars in Australia and raced them in Japan, Macau and Indonesia. He also entered the car at Bathurst, where Garry Scott drove it to fifth place.

In the early 1990s Shepheard had started his own suspension business, but racing was still keeping him busy. GMH again approached him to run Brock in its cars at the 1995 Round Australia Trial. Brock might not have had a great result, but Shepheard again produced the results.

“Ed Ordynski CLICK HERE won that event for GMH, so it was a success,” said Shepheard.

“In the other car Brock had a reasonable run but he caught a car in the dust and went up its backside. There was a fair amount of damage.

“In the third car Ross Dunkerton pulled out at Mt Isa. 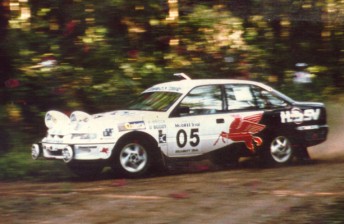 The famous 05 as a Rally car

“I had a relationship with Holden between 1968 and 1996, which is when it changed its focus on racing.”

Having worked with Holden and Mitsubishi, Shepheard then moved to Volvo.

“We did production cars and had Brock drive the car,” said Shepheard.

“We did the Super Tourer thing, starting with the Wagon over here with Tony Scott. The car was a handful; it was designed for billiard tables, at Lakeside we had to modify shocks and springs.

“Then came the 850 sedan; we did a special deal with Brock and the car was painted red – which Sweden didn’t like.

“We got a fourth and fifth at Bathurst, then Volvo bought out the S40. We ran it at Bathurst with Jim Richards and won the 1998 Super Tourer Bathurst 1000.

“After that Volvo decided to pull the pin.”

Shepheard had made a name for himself as a successful team manager and car builder, his business was continuing to grow and he was still involved in rallying.

“We run our own cars, we bought two (Mitsubishi) Evo fives in 1999, which we run with my younger son Steven,” said Shepheard.

“I drove one and Steven was in the other in the Queensland Rally Championship (QRC) and select ARC events.

“I was very proud of Steven,” said Shepheard.

“The car was a struggle. We needed to buy an Evo ten, which is 140 kilos heavier than the (Evo) nine.

“Steve was getting closer to the pace of the front runners over the weekend, with many of his times up there with the very best (drivers).

“I am very proud, very happy; it was good to see him get the result.” 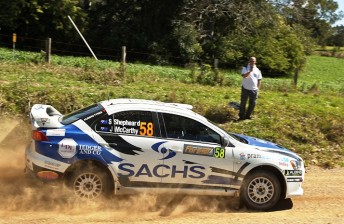 While son Steve’s performance rates as a highlight for the family, George thinks back to his career and has many fond memories.

“In 1968 I was asked by BMC, or British Leyland as it was known back then, to do the London to Sydney marathon,” said Shepheard.

“It was probably the stand out thing, not because of the result, it was more that I was able to do that event, it was the original London to Sydney.

“Winning the 1979 Round Australia Trial, coming first, second and third and knowing it was something my father started was a big thing for me also.

“I enjoy what I’m doing, I dread the day that I have to give it away.”

When he is not racing Shepheard still runs his own business – GSA Wholesale Suspension.

“We have a number of upper market replacement shocks and we also have our own line of (passenger car) four wheel-drive shock absorbers,” said Shepheard.

“The four-wheel drive products have been in development for four or five years. We do the development then get them made overseas, some in Brazil, some in Germany.

“The business continues to grow and grow, we now employ eleven people.

“Sometimes we have to justify how many pennies we pinch to go rallying, but everything is going really well.”