Car of the Future to get Phillip Island berth

Car of the Future to get Phillip Island berth 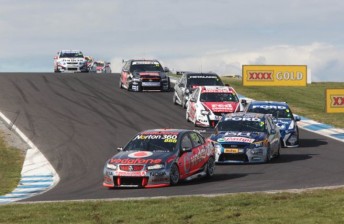 V8 Supercars’ Car of the Future test program will receive a significant shake-up when it resumes after next month’s Supercheap Auto Bathurst 1000.

According to V8 Supercars, ‘Phase 1’ of the test program is now complete, with 4,000km having been put on the Pace Innovations-built prototype car at Queensland’s Ipswich and Morgan Park circuits over the past three months.

Following yesterday’s V8 Supercars Commission meeting, category motorsport manager Adam Perry has been entrusted with developing a plan for ‘Phase 2′ of the test schedule, set to commence after Bathurst.

A move to the 2013-specification 18-inch wheel and tyre package, the introduction of V8 Supercars Championship drivers, and moving the program south will join the debut of the VE Commodore bodied car as key agenda items.

“Phase 2 will incorporate other circuits, and we will absolutely go to Phillip Island,” Perry told Speedcafe.com.

“If you’re serious about doing tyre testing then you have to go down here.”

The category’s new control wheel is a continuation of the current deal with Queensland firm Racer Industries, which imports rims from Team Dynamics in the United Kingdom.

Having already been ordered, the first of the new wheels are set to arrive a fortnight after Bathurst, with Perry describing their styling as a “nice change” from the current look.

Brake testing will also get underway in the near future, with the current cast iron disc package likely to stay, pending the exact thermal efficiency benefits of the bigger wheel package.

Despite being praised for their efforts, current test drivers Jack Perkins and Scott McLaughlin are likely to be stepped aside in favour of main series pilots once running resumes – with only a small selection of the star drivers expected to take part.

“I think we’d select the top drivers at the time out of Ford and Holden,” said Perry.

“I think that’d be the fair way to go about it, but it will be up to the Commission to make the final judgement on that.”

The timing of Phase 2 of testing will mean that Mark Skaife, who takes up his role of V8 Supercars Commission chairman after completing his duties with TeamVodafone at Bathurst, will also be available to step into the drivers’ seat.

More importantly for the teams, the Bathurst event has been set as the revised target for finalising the COTF’s technical specifications.

“We’re still not signing off on components yet, but the teams will have CAD drawings certainly in the next couple of weeks, and have the full package I’d say by Bathurst,” said Perry.

“It’s taken a bit longer than we wanted it to, but it is a prototype program at the end of the day.”

V8 Supercars plans to allocate specific days for teams to test their new cars in 2012 – all of which are likely to be scheduled for the second half of the year.

“Different teams will have different capacities to build cars, and what we don’t want is some teams getting an early leg up,” said Perry.

“We’ll go out to teams shortly with what that plan will be, but I can’t see cars hitting the track much earlier than August.”

See Speedcafe.com’s guide to this weekend’s L&H 500 at Phillip Island below