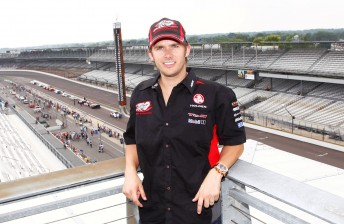 Dan Wheldon will race for a cool $5m paycheque in Vegas

Indianapolis 500 Champion – Dan Wheldon – who will partner James Courtney in the Armor All Gold Coast 600 – will take the Go Daddy IndyCar Challenge for $5 million at the final IndyCar race of the season in Las Vegas, October 16.

Wheldon will be forced to start from rear of grid in the IZOD IndyCar World Championships race – regardless of where he qualifies. Should he cross the line first, he will be awarded a $5 million prize – half of which will go to a lucky fan.

The Go Daddy Challenge replaces the original challenge proposed by IZOD IndyCar Series organisers (which was to offer a $5 million prize to any driver from any Series to race and win the Las Vegas event).

Once complete, Wheldon will make the dash down to Australia to join the Toll Holden Racing Team for the Armor All Gold Coast 600.

Wheldon’s entry is a combined effort between Sam Schmidt Motorsports and Bryan Herta Motorsports – with whom he won the Indianapolis 500.

“We said at the beginning of the season we wanted to offer our fans value, competition and entertainment and hosting the Go Daddy Challenge with a charge through the field will only further heighten the drama around what’s shaping up to be one of our biggest IZOD IndyCar World Championships presented by Honda,” IndyCar CEO Randy Bernard.

Regardless of Wheldon’s exploits in the $5 million race, the Championship is set for a thrilling finale, with the battle between Dario Franchitti and Will Power anticipated to come down to the Vegas race.

The IZOD IndyCar Series continues this weekend in Japan – for the first time on the Motegi road course. This will be the Series’ last visit to the land of the Rising Sun.

The Armor All Gold Coast 600 will take place on the streets of Surfers Paradise between October 21-23, with tickets available from ticketek.com.