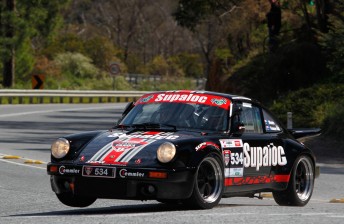 Kevin Weeks out in front at Classic Targa Adelaide

South Australian Kevin Weeks has dominated the first day of Supaloc Classic Targa Adelaide, setting himself up for a victory on Saturday on the twisting tarmac stages in the Adelaide Hills.

In the Classic Outright competition, Weeks took his 1974 Porsche 911 Carrera RS to a 43 second buffer over fellow South Australian Matt Selley, and West Australian, Tolley Challis, also in 1974 Porsches, who are tied for second in the CAMS Australian Targa Championship round.

Despite the age of his car, Weeks is also the fastest of any car in the field, leading the Supaloc Overall competition by 16 seconds from Targa Tasmania titleholder Tony Quinn, who is behind the wheel of a 1990 Nissan Skyline GTR that falls outside of the Classic Outright competition regulations.

After starting at the Adelaide Showgrounds on Thursday morning, competitors headed into the Adelaide Hills to complete four closed road stages, before a lunch break in Gumeracha.

A further four stages completed the day, included the 17.64 kilometre Castambul test, the longest of the event.

Weeks was third quickest on yesterday’s short prologue stage at Menglers Hill, but quickly asserted his dominance in fine and sunny conditions.

“I started off pretty ordinary this morning,” saidWeeks.

“I asked the crew to soften the car off last night, but I learnt my lesson and had them stiffen the suspension up at the break, and then the car was excellent.

“The really fast twisty stuff never suits us and I’m never comfortable on the gorge, but tomorrow should suit us better and we’re looking to a good start on the Mount Lofty stage, which I always feel confident on.”

Tomorrow crews head to the south and south west of Adelaide for eight stages over a distance of 51 competitive kilometres. The day includes an ascent up Mt Lofty, and the iconic Willunga Hill stage where a big crowd of spectators is expected to witness some of Australia’s fastest classic cars in action.