The FPR Falcons in the Phillip Island pitlane

Ford Performance Racing’s revised colour scheme and race suits for this weekend have been revealed.

Will Davison, who will team with FPR stalwart Luke Youlden for this year’s endurance races, is no stranger to special black colour schemes, having raced in Jim Beam black at Bathurst in 2007 before being a part of the Holden Racing Team’s retro celebrations last year.

“I’m always a fan of spicing a few things up for the enduros,” Davison told Speedcafe.com.

“It’s also great to be driving for a factory team that has a direct link to FPV. Obviously our fan base is very passionate about the road car side of things, and at the Motorshow there was a lot of positive reaction to the Black GT concept. 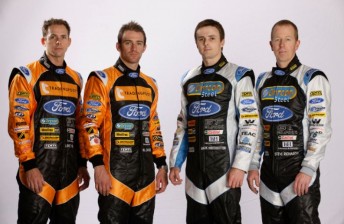 “It’s just nice to celebrate these things and have a way of linking the road and race programs together, particularly at this time of year.”

Davison expects FPR to figure strongly in this weekend’s L&H 500, despite a tough run last time out at Queensland Raceway.

“We’ve got high expectations for the weekend – we’re putting pressure on ourselves for a big result.

“We’ve been very competitive in the hard tyre races all year. It’s going to be very hard to beat the Vodafone guys, but when we’re on our game we definitely can, so we’re confident that we’ll be amongst it somewhere.”

See below for footage of preparations at Phillip Island today.