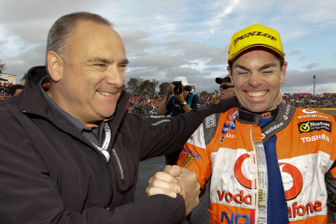 The TeamVodafone Holden Commodores are red-hot favourites to win this weekend’s L&H 500 Phillip Island, according to betting agency Sportingbet.com.au.

The Craig Lowndes/Mark Skaife combination has attracted the bulk of the punter’s backings, just ahead of team-mates Jamie Whincup/Craig Lowndes.

While Lowndes/Skaife is the race favourite, Whincup remains as a short-priced title favourite at $1.30.

Sportingbet Australia spokeperson Bill Richmond says that seeing the championship leaders and endurance experts at the top of punter’s picks is no surprise.

“It’s no surprises that the Triple Eight cars of Lowndes and Whincup are the favourites,” Richmond told Speedcafe.com.

“Lowndes and Skaife are the punter’s favourites at $3.25, Whincup/Thompson $4.00, and there’s no surprises there. They’ve dominated again this year and their record in the endurance races over the years have been phenomenal.

“There’s a bit of a gap after them to Winterbottom/Richards at $8, but that’s a reflection of how dominant Lowndes and Whincup have been during the season.”

“There has been a bit of money for van Gisberge/McIntyre at $11. There’s been some money for Steve Johnson and David Besnard at $26, as well as Will Davison/Youlden,” Richmond said.

“They’re the ones that we’ve seen a bit of support for, but clearly the two favourites and the best two backed are the Triple Eight cars.”

Richmond says that he sees good value in the van Gisbergen entry, as well as the Lee Holdsworth/Greg Ritter combination.

“I would have thought that van Gisbergen/McIntyre represents good value at $11,” he told Speedcafe.com.

“At $17, Holdsworth and Ritter also offer very good value. This team has been very competitive in these races. They have both been with the team for a long time, so I think at $17, they are the best outsider.”

See below for odds for the L&H 500, courtesy of Sportingbet.com.au

See below for odds for the 2011 V8 Supercars Championship, courtesy of Sportingbet.com.au