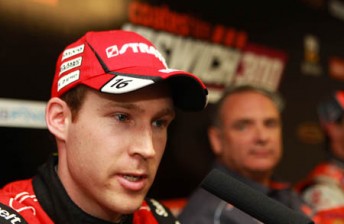 David Reynolds in the Friday press conference at Queensland Raceway

Continuing speculation about the driving future of V8 Supercars driver David Reynolds has been cut off at the pass again by his current employer Kelly Racing.

Speculation has been circulating that Reynolds is on the verge of signing a deal to replace Paul Dumbrell in the third car at Ford Performance Racing in 2012, but Kelly Racing is adamant they have the 26 year-old contracted until the end of 2012 and released a brief three-sentence statement this morning stating its position.

“We are aware of continuing speculation regarding the future of David Reynolds at Kelly Racing beyond 2011,” read the statement.

“Kelly Racing entered into an agreement with David Reynolds that concludes at the end of the 2012 season.

“As far as our team is concerned this agreement continues to bind both parties for this period.”

Reynolds is set to drive the Stratco-backed Commodore with Tim Blanchard this weekend at the L&H 500 Phllip Island and again in the Supercheap Auto Bathurst 1000 on October 9.

He is then scheduled to drive the car with IndyCar star Alex Tagliani at the Armor All Good Coast 600 on October 21-23 before finishing the season at Tasmania, Sandown and Sydney and then preparing for 2012.

FPR’s director of business operations Mark Roworth could not comment, only stating the factory team’s plan to secure a replacement for Dumbrell by next month.

“We’ve confirmed that Paul isn’t driving here as a full-time driver next year and there are a host of other drivers on the market – some from within the category and some from outside of the championship,” Roworth said.

“We’re investigating every option, and we plan on making a decision by Gold Coast. If not before then, shortly after it.”