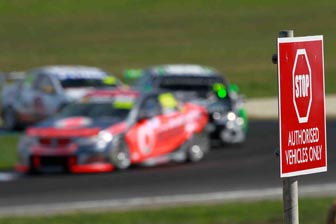 Besides this weekend's L&H 500, V8 Supercars are generally not permitted to race at Phillip Island

Victorian V8 Supercars teams have not tested regularly at Phillip Island since the mid-2000s. In recent times, V8 test days have taken part in a more northerly part of Victoria – Winton Motor Raceway.

While some of the drivers might get the odd extra state or club race meeting or drive day in at Phillip Island, almost all of their competitive driving at the picturesque Island circuit will be run over just three days of the year. This year, those three days start tomorrow for the L&H 500 – the first of V8 Supercars ‘Season of Endurance.’

Three days a year of competition doesn’t sound like a lot, does it?

Correct, and that’s where a handy online gaming program called iRacing is filling the void.

Thanks to the advancements in computer simulation, iRacing is taking V8 drivers to Phillip Island every day of the week (if they so choose).

The popular iRacing simulation is an online racing game, pitching you against the rest of the world on some of the great racing circuits around the world.

The graphics in the game are superb, but more importantly, the car’s behaviour is realistic, making it a tool used by many of the current V8 drivers.

But why does Speedcafe.com bring you this story now? The answer is that while iRacing has a huge catalogue of great race tracks, the only Australian circuit in its list is Phillip Island.

See below for Speedcafe.com’s video.