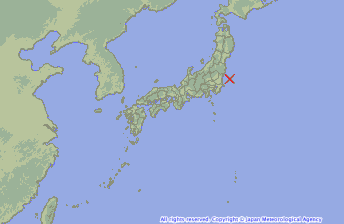 A graphic illustrating where the 6.2 quake struck today near Japan

A 6.2 magnitude earthquake has struck 130km south-east of the Motegi circuit in Japan where IZOD IndyCar Series teams are preparing for this weekend’s final road course event of the season.

The epicentre was to the East of the main Island and around 220km from Tokyo, however relatively close to shore and only 10km below sea level. A tsunami warning has not been issued and no major damage has been reported.

It was felt by the IndyCar teams, with Graham Rahal tweeting (it’s) “all good here – just a little shaking to keep us all awake!”

James Hinchcliffe tweeted soon after “I literally just had a note placed under my door – ‘in the event of an earthquake…’.

The irony of the earthquake is that this weekend’s third to last round of the IZOD IndyCar Series had to be moved from the Motegi oval due to damage sustained in the March 11 earthquake.

Australia’s Will Power sits just five points behind Dario Franchitti in the overall Championship pointscore and can wrap up the road course Championship this weekend in Japan.