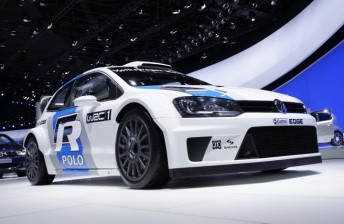 The continued unveiling of world leading motor sports vehicles at the Frankfurt Motor Show has continued with Volkswagen presenting the first drivable prototype of the Polo R WRC.

A showcar was unveiled earlier in the year, now an actual driveable version will be used to launch the testing programme this year in preparation for the FIA World Rally Championship from 2013. The switch to the WRC comes after three consecutive victories in the off-road Dakar Rally.

The new Polo was unveiled in Frankfurt to an audience of about 2,000 international media representatives and will be showcased on the Volkswagen stand for the duration of the motor show.

“Now we’re already in a position to present the first ready-to-run vehicle that will subsequently be used in extensive tests – an important step in our preparations for the WRC entry in 2013.

“I’m pleased about our team having managed to get this car off the ground in such a short time. And I’m very proud about the opportunity to present it to the public in Frankfurt.”

The Polo R WRC is based on the Volkswagen Polo that is sold around the world. Its centrepiece is a 1.6-litre TSI engine that uses direct injection and turbocharging and delivers a power output of about 300 HP and maximum torque of about 350 Newton metres. The new engine regulations that came into effect this year was one of the key areas that encouraged Volkswagen into the WRC.

This year’s World Rally Championship has just Ford and Citroen as factory entries, with Mini confirmed as a fulltime entry in 2012 and VW the following year, the WRC is also confident of attracting other manufacturers to the elite level of the sport.

Volkswagen is preparing for the new sporting challenge with an extensive testing programme that includes WRC commitments with vehicles of the Group’s Škoda brand and the evaluation of young talents. 2003 World Champion Petter Solberg has been linked with VW’s entry.