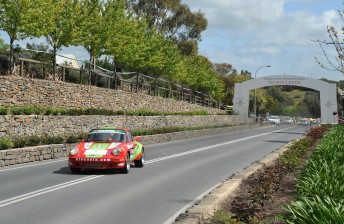 West Australian Tolley Challis has upset the local hopes on the opening day of Supaloc Classic Targa Adelaide, setting the fastest time in the classic outright competition at the official prologue at Tanunda in the Barossa Valley.

The real action in round one of the CAMS Australian Targa Championship gets underway tomorrow, with eight stages across 67 competitive kilometres. Challis came to Adelaide with high hopes and was happy with his opening effort.

“The pacenotes worked really well and the car felt good over the prologue stages,” Challis said.

“I’m a bit underdone because we probably didn’t spend long enough on the reconnaissance, but the plan for tomorrow is to go flat out and try to stay at the top of the leaderboard.”

Tomorrow sees the field tackling eight stages north east of Adelaide, stopping for lunch at Gumeracha before finishing back at the Adelaide Showgrounds.

The rally concludes on Saturday.