Webb with the cast of Star Wars

Jonathon Webb has taken the covers off his one-off livery change for this weekend’s L&H 500 Phillip Island.

Webb’s Mother Energy Drinks Falcon will feature Star Wars character Darth Vader on the bonnet and Yoda in the roof, promoting the release of Star Wars: The Complete Saga on Blu Ray.

Webb unveiled the new-look at Federation Square in Melbourne.

“The car looks brilliant. We had quite a bit of fun with it, and hopefully the fans like it too,” Webb said.

“The Mother design is already one of the best looking in the championship, but we think that fans of both the V8s and Star Wars will get a real kick out of this new look and fingers crossed some of the ‘Force’ will rub off on the car.

“I think it’ll have some of the drivers doing a double-take when they check their rear vision mirror and see the Dark Lord staring them down! It’s going to stand out flying around the track, and we’re looking forward to a good weekend.” 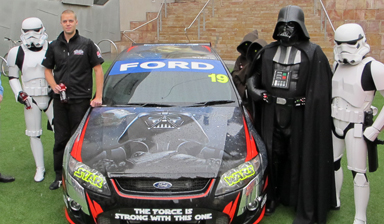 Jonathon Webb with some of the cast of Star Wars

All six of the classic sci-fi films have been released onto Blu Ray, offering viewers maximum picture and audio quality, plus an additional three disks of extras, with more than 30 hours of in-depth bonus supplements and special features.

Webb will be partnered by Irishman Richard Lyons in the #19 Mother Energy Drinks Falcon FG at Phillip Island and the Bathurst 1000.

The L&H 500 Phillip Island kicks off with practice on Friday.