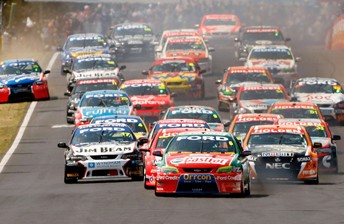 SPEED TV will send out its own commentary crew for the Supercheap Auto Bathurst 1000, broadcasting the race live into American homes.

The move coincides with V8 Supercars bold plan of expanding the category beyond Australian shores, holding as many as 18 events by 2014 – including six off-shore. “It’s a terrific day for our sport that we can pull off such a coup as this,” Cochrane said.

“To have the top flight NASCAR commentary team coming out here, calling the Bathurst 1000 live back in America primetime on Saturday night – it proves is that we are gaining international traction.”

Cochrane hinted that this could be the first of more live international broadcasts.

“To have the whole SPEED and Fox organisation so dedicated and so involved in covering both the Bathurst round and the Gold Coast round as an experiment as what we’re going to get in season 2012,” he said.

“The reason why they are out here doing this is because of the gain in popularity.

“We’ve seen our ratings more than double this year on SPEED in North America. These guys believe we can get the ratings even higher than they are now. I’m sure that’s true, with our race coming up the Spring of 2013 in Austin, Texas.

“It’s great for V8 Supercars. It’s great that we’re such a strong export item and a tremendous endorsement of our teams and drivers.”