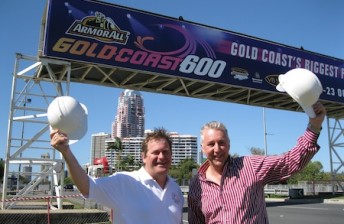 “The first spectator bridge being installed really signifies the event is coming closer,” said Reeves. “It is an exciting time to see this precinct grow from being a public road into one of the world’s most iconic street circuits.”

Reeves highlighted the live SPEED Channel coverage of the V8 Supercars races from the Gold Coast as being a key driver to future tourism growth on the Gold Coast.

“The Gold Coast 600 and this television deal positions Queensland as the events state and I expect we’ll have an influx of visitors when they see the V8 Supercars racing wheel to wheel mere metres from the Gold Coast’s immaculate beaches.

“When everyone in America sees the Surfers Paradise beaches, this amazing racetrack and everyone having such a good time at the Gold Coast 600, they won’t be able to resist coming down and joining in the fun.” 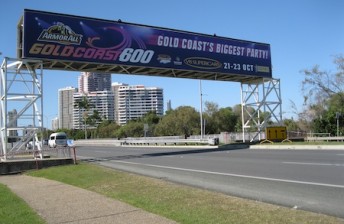 Howard, too, was enthused about the prospects of this year’s event:

“Last year’s reduction of the circuit to the shorter 2.96km layout resulted in much less disruption, a speedier circuit build and delivered on providing better race action for our spectators,” he said. “This event is one of the best in the world and this circuit build employs world’s best practice right along the way.”

The Armor All Gold Coast 600 – October 21-23 – pits 28 international drivers from 12 countries with the Australian V8 Supercar racers – who will be fresh from the drama of Bathurst. It has two nightly concerts headlined by Bliss N Eso (Friday night) and Scottish rockers, Simple Minds in their only Australian appearance in 2011.

Tickets are available from ticketek.com or by calling 132 849.