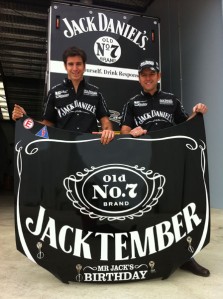 Rick and Todd Kelly with the one-off 'Jacktember' bonnet

To help celebrate the birthday of Mr Jack Daniel at the first endurance event of the 2011 V8 Supercars Championship, both Jack Daniel’s Commodores will carry special ‘Jacktember’ bonnets, commemorating the birthday of the man behind the ‘Old No 7’ Tennessee whiskey.

‘Jacktember’ celebrates the birthday of Mr Jasper Newton Daniel, affectionately known as Jack. This year, friends of Jack all around the world are celebrating his 161st birthday – the same amount of laps as the Supercheap Auto Bathurst 1000.

But there is a mystery surrounding Mr Daniel’s real age. Jack left home before he was 10 years old, so the exact date of his birth is a mystery.

“Racing drivers are notorious for lying about their age and it seems that old Jack might have also enjoyed keeping his real age a mystery,” said Todd Kelly, who will pair up with Fujitsu V8 Series standout David Russell in the #7 Jack Daniel’s Commodore.

“We love all the stories behind the Jack Daniel’s brand and Jack’s birthday is one of our favourites.

“Jack Daniel’s Racing is pleased to help celebrate Jacktember at Phillip Island, even if we are not quite sure on the exact age of Mr Jack.”

Rick Kelly, currently fourth in the 2011 V8 Supercars Championship points standings will be partnered by Owen Kelly in the #15 JDR Commodore.

The celebrate Jacktember a a new, sharper Old No 7 label and bottle will be launched in Australia this month.

Fans can enter a competition to win a trip to the Jack Daniel’s distillery in Lynchburg, Tennessee in the United States via the Jacktember Facebook app at http://www.facebook.com/JackDanielsAustralia