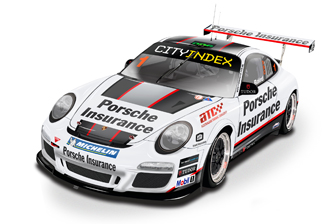 The new-look of Craig Baird's Porsche

Craig Baird will sport a new livery for the coming round of the Porsche City Index Carrera Cup Australia championship at Phillip Island, Victoria.

The re-branding of the New Zealander’s race car will see the Porsche Insurance brand replace its sister company Dutton, which has featured on Baird’s Porsche since the beginning of the season.

Porsche Insurance is a partnership between Porsche Financial Services Australia and Alliance Insurance Broking Services. Alliance is electing to promote its Porsche-specific brand on Baird’s car for the Phillip Island round.

“It’s great to see that Alliance is looking to get the most out of the sponsorship in Carrera Cup, and having Porsche Insurance involved with the championship definitely suits the brand,” said Baird.

“The L&H 500 will be an interesting event for me and three other Carrera Cup drivers also racing in the V8 Supercar endurance event, so it will no doubt me a busy weekend for a few of us.

“Getting extra miles in both the Porsche and the V8 Supercar will no doubt help out when we’re on track and allow me to be competitive and get as much exposure for the #1 Porsche Insurance car as possible.”