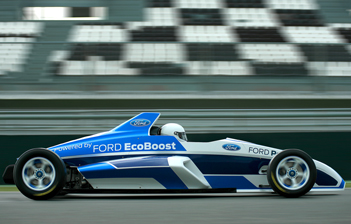 The new Formula Ford was revealed at the Frankfurt Motor Show

Ford has revealed its new 2012-specification Formula Ford at the Frankfurt Motor Show, but don’t look for it to compete in Australia next year.

The new car will make its competition debut in the 2012 Dunlop MSA Formula Ford Championship of Great Britain.

At this stage, the Australian Formula Ford Championship has no plans to introduce the new car, stating it will wait for the complete technical regulations and weigh up its viability.

“I’m getting more information from Ford about it today, so at this point, there’s not much I can really say.

“At some point, it may come here, or we may get some parts of it.

“It is certainly a great looking car, but we’ll have to see if it is feasible in Australia. We’ll see how it rolls out in England next year.”

Motorsport Manager for Ford Europe, Mike Norton, said that Formula Ford aims to remain at the forefront of driver development.

“Formula Ford is already well-known as the perfect proving ground for up-and-coming drivers and engineers, and it is Ford’s desire to continue nurturing this by supporting teams and manufacturers across the globe with the safest environment, latest technologies and most attractive packages.

“Formula Ford is in its 44th consecutive year and remains a very popular choice for drivers around the world. Many Formula Ford drivers have gone onto careers in Formula One. This is a great compliment to Formula Ford and we are at Ford proud of this achievement.”

See below for a gallery of the new Formula Ford.