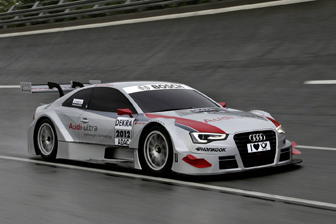 Audi has revealed its brand-new, cut-price DTM race car to the world at the International Motor Show in Frankfurt.

The unveiling of the Audi was held on the same day as the release of the new 2012-specification Formula Ford. CLICK HERE for Speedcafe.com’s Formula Ford story.

Audi’s new car – the two-door coupe A5 – is said to have a reduction in cost by up to 40 percent.

The new Audi A5 DTM, which bears the internal project name ‘R17’ at Audi Sport, conforms to the new, more controlled technical regulations that will come into effect in the 2012 season. According to Audi, the project was premised on three key aims – the safety of the vehicles, reduction of the costs by up to 40 percent and a spectacular exterior design.

The new Audi will compete against long-time rival Mercedes, plus returning manufacturer BMW next year.

The Audi A5 DTM appears lower than its predecessor, which has taken the marque to four of the last seven DTM titles. 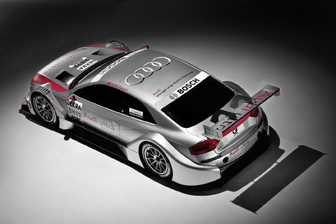 “Due to these shared components, it was possible to achieve the cost reduction target of up to 40 percent without compromising on the safety and attractiveness of the DTM vehicles,” said Head of Audi Motorsport Dr. Wolfgang Ullrich.

The R17 project was launched in May 2010 and a month later the decision was made that the A5 would serve as the base model.

Trials in the model wind tunnel have been run since February 2011. The roll-out was successfully performed on July 29, 2011 by Martin Tomczyk. Since then testing of the A5 DTM has been in progress.

The homologation of the A5 DTM is scheduled for March 1, 2012 – until then the engineers at Audi Sport in Ingolstadt and Neckarsulm still have time to fine-tune the detailed solutions.