Webb to ‘use the force’ with new Island look

Webb to ‘use the force’ with new Island look 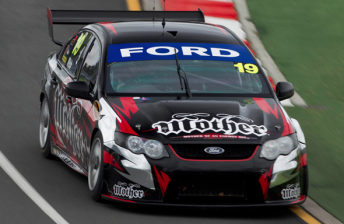 Webb’s Mother Energy Drinks-backed Falcon will race with a new bonnet, roof and boot design, featuring some of Star Wars’ classic characters like of Darth Vader and Yoda.

The Star Wars-inspired scheme coincides with the release of Star Wars: The Complete Saga on Blu-ray disc.

The new look Ford will be unveiled at Federation Square in Melbourne on Wednesday at 9am. Fans are encouraged to come and see the new car. Jonathon Webb will also be on hand at the unveiling.

Webb says that his one-off Phillip Island scheme is “unique.” 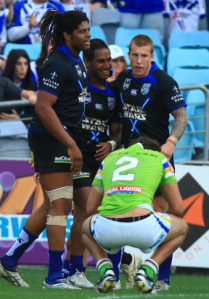 The Bulldogs (in black) wore this one-off jersey recently

“The sides of the car are the same with Mother, but the bonnet, roof, front rear bars, the headlights are all Star Wars themed. We’ve got Darth Vader all over the bonnet, Yoda on the roof, a couple of other new bits on the front and rear bars.”

Webb will team up with Irishman Richard Lyons in the two endurance races at Phillip Island and Bathurst.

Lyons tested at Queensland Raceway last week and despite his limited time in a V8 Supercar, Webb was impressed.

“It has been a few years since he’s been in a Supercar,” Webb said.

“Obviously after driving Japanese GT stuff, they have plenty of grunt, plenty of aero, and lots of grip, so the V8 will be a bit of a unique beast.

“It was good to give him a full day in the car, just to get himself comfortable with the car and with all the switches and dials and all that sort of stuff to make sure he’s perfectly comfortable as he comes to Phillip Island, Bathurst time.

“He’s a very smart guy, he’s been around and done a lot before. He built into it nice and easily and by the end of the day, I think he pretty as quick as anyone else out there for the day.”

The V8 Supercars hit the track this Friday for practice before two qualifying races on Saturday, followed by the 500km race on Sunday.