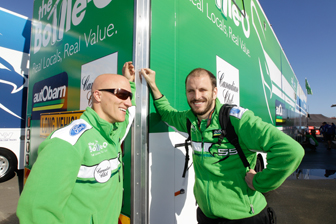 The 15th episode of the IRWIN Tools Endurance Countdown looks at The Bottle-O Racing Ford Falcon.

Here’s the things we know. Paul Dumbrell is fast at Bathurst. His team-mate Dean Canto is very experienced and had one of his best race meetings at Phillip Island las year. We also know that Dumbrell will retire from full-time driving at the end of the season, and that Canto is being considered as one of the drivers to replace him.

This pair both have many reasons to have strong endurance results at Phillip Island and Bathurst.

Will the 2011 endurance races go some way to deciding who will drive the #55 car next year?