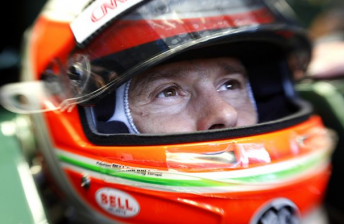 Jarno Trulli will remain at Team Lotus for a third-consecutive year after the Anglo/Malaysian squad announced his contract renewal today.

“We are all delighted that we have been able to reach an agreement to keep Jarno on board for at least one more year with our team,” he said.

“He has shown in qualifying in Monza just how much pace he has and how he can wring every last drop of performance out of his car and since day one with us he has brought a level of professionalism, insight and raw speed to our team that has helped accelerate our development on and off track.”

The Italian thanked the team for the opportunity.  “I am very pleased that we have been able to confirm today that my contract with Team Lotus has been extended into 2012,” he said.

“The challenge I first accepted when I joined the team is becoming more exciting every day, and I am very proud that I can keep helping the team take steps forward for at least another year.

“I would like to thank Tony, Kamarudin and Nasa for the chance to keep working with them, Riad, Mike and the whole team and I am looking forward to the challenges that lay ahead.”

The Italian driver has raced for the team since its inception in 2010 alongside Hispania Racing and the Virgin team.

Thus far, none of these teams have scored world championship points.

See below for Speedcafe.com’s F1 Race Guide ahead of the Italian Grand Prix. For Australian viewers, ONE HD’s coverage starts at 9am (AEST).