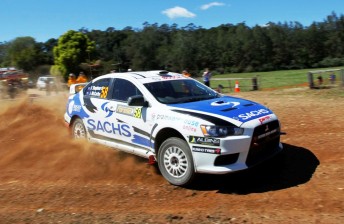 The opening day had been dominated by Ryan Smart in his turbo-charged all-wheel-drive Toyota Corolla in tricky wet conditions. However, clear sunny conditions on the final day of running for crews in the ARC allowed the roads to dry out, and the grip return.

Shepheard’s SACHS Rally Team Mitsubishi Lancer Evo X was holding second for most of the day, before Smart developed a drive line problem. Smart was slowed in the final stages, while Shepheard and moved into the lead on the last gravel stage.

Along with co-driver John McCarthy, Shepheard took a 26 second lead into the two final short Castrol EDGE tarmac stages around the Coffs harbour front, and eventually took the win b 63 seconds, with Smart and Evans filling the podium places.

“I Can’t put this into words how I feel right now … it’s just amazing,” said Shepheard.

“We kept it quick, clean & neat all day with the absolute aim to be there at the finish.

“But that is the style of road I live for, so I had to have a fair go.

“My dad won his first ARC title the year I was born (1971), so it’s taken 40 years for the Shepheard name to be at the top of an ARC score sheet again. A Long wait, but we got there”

Father George has achieved plenty in Australian motor sport, both on the gravel and circuit racing, but he was left nearly speechless after a classic tough rally event.

The final round of the BOSCH Australian Rally Championship will be Rally Victorian in Gippsland in November.