Solberg unsure of future beyond France

Solberg unsure of future beyond France 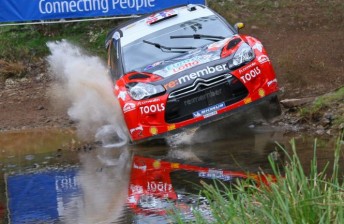 Former World Rally Champion Petter Solberg says his performance on Rally France in three weeks time will determine whether or not he completes the remainder of the season.

After struggling to fifth place with his privately entered Citroen DS3 in the recent Finnish and German rounds of the World Rally Championship, Solberg took third on this weekend’s Rally Australia.

Having inherited the place on Friday thanks to crashes from works Citroen drivers Sebastien Loeb and Sebastien Ogier, Solberg said his upturn in speed was the most important element to take from Coffs Harbour.

“I am very happy with my speed over the whole weekend – for me that was the main thing,” said Solberg.

“It hasn’t been good in the last few rallies, but with the engine change (to a fresher unit) and everything before this rally, things are back on track.

“The thing is we can’t continue like it was on the last two rallies – there is no point to drive and complete the rallies.”

Elaborating on his struggles against the factory cars, Solberg appeared frustrated with his current situation.

“You have a lot of sponsors and you need performance – I can’t say I’ve sold them to be fifth on every rally and not even win a stage,” he said.

“We will run in France and then take it from there. If it is a good performance there then we will continue.

“I’m not just there to be a part of it. I have to perform and want more than sitting here in third.”

The 36-year-old Norwegian refused to be drawn on his plans for 2012.

“Things are ongoing, but we will have to wait and see,” he said. “It’s not done overnight, you know.”

Three rounds remain in this year’s championship, with Rally Spain and Rally Great Britain still to come after the French event.