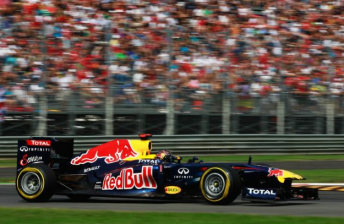 Sebastian Vettel has completely dominated the Italian Grand Prix at Monza, winning comfortably ahead of Jenson Button and Fernando Alonso.

At the track where the German driver won his first Formula One race, Vettel was a class above his rivals, scoring a 10 second victory.

The only major threat came in the opening laps when Ferrari hero Alonso launched well from fourth on the grid to first. Vettel quickly readdressed his position at the front and was not touched.

Vettel’s win puts him a whooping 112 points ahead of Alonso in the title and means that he could wrap up the title at the next round in Singapore.

The other Australian, Daniel Ricciardo (HRT F1), failed to get his car off the line. The team eventually got his car going, finishing 14 laps off the leader.

Ricciardo’s team-mate Vitantonio Liuzzi caused excitement at the first corner fo the race when he wildly spun onto the grass, sliding into Nico Rosberg (Mercedes) and Vitaly Petrov (Renault).

Michael Schumacher got his fair share of television coverage, thanks to a great start, and his persistent attempts to keep those behind at bay.

The seven-time world champ raced hard with McLaren’s Lewis Hamilton for much of the race. After passing and repassing on a number of occasions, Hamilton eventually finished fourth ahead of Schumacher.

The next round of the world title will be held on the Singapore streets in two weeks time.