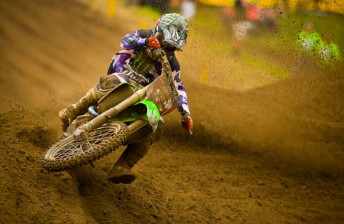 Ryan Villopoto is the AMA Motocross Champion of 2011

A second place overall for Monster Energy Kawasaki’s Ryan Villopoto at the final round of the Lucas Oil AMA Pro Motocross Championship, the Traxxas Pala National from Pala Raceway in California has secured his first title in the premier 450 class.

In the opening moto all eyes were on Villopoto and his championship rival, Rockstar/Makita Suzuki’s Ryan Dungey, who were separated by just 14 points. Out of the gates, the duo positioned themselves within the top 10, and immediately began working on moving forward. Out front Mike Alessi looked to pull away with Justin Barcia in pursuit. After just three laps, Barcia took over the top spot, but it was only a matter of time before the series’ perennial front-runners were battling for the lead. Both Villopoto and Dungey followed nose to tail throughout the moto, and on Lap 12, Villopoto slipped past Barcia and never looked back. Dungey followed suit two laps later, finishing second, and also losing an additional three points in the standings.

In Moto 2, the championship leaders found themselves in similar positions off the start, while Australia’s Chad Reed took over the early lead. While leading, Reed went down, allowing a closely-pursuing Barcia to assume the position. Upon remounting, Reed was forced to deal with a hard-charging Dungey and Villopoto. Dungey worked his way past quickly, and set his sights on Barcia, and the overall win. Villopoto took his time getting around Reed, using his healthy points lead to his advantage, but eventually settled into third, where he would finish the moto. At the front of the field, Barcia and Dungey brought the fans to their feet, battling for the win over the final two laps, with Dungey prevailing to secure his fourth win of the year.

“I didn’t want to just go out there and ride today,” said Villopoto.

“I felt good in the first moto, and I went into the second just looking to stay out of trouble. We started off outdoors not very good, but we finally came around. It’s been a tough year.

“If it weren’t for (Dungey’s) DNF at Texas, I would have come up a little shy (of the title). But, things like that happen. The turning point was at Unadilla, when we brought out our new bike. We made a lot of progress there.”

After dominating the first half of the season, Reed finished third in the championship standings. A big crash at the Spring Creek Nationals in Minnesota and mechanical issues over the final rounds ruined any chance of winning the title.

South Australia’s Brett Metcalfe enjoyed his best season in the AMA Motocross Championship with a round win and fourth place in the final standings.