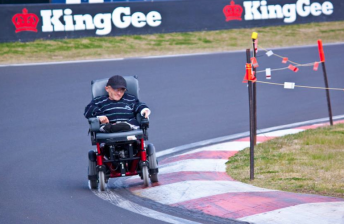 James Cormick clips the apex at The Chase

James Cormick has set a new lap record around Mount Panorama – in a wheelchair.

This was his second attempt at lapping Mount Panorama in his wheelchair, eclipsing his former benchmark time of 40m16.48s.

Armed with a new electric chair, Cormick beat his first time by almost 15 minutes, but says there is more time to be found.

“I knew this new chair would smash that time so it had to be done again to prove it,” the long-time motor racing fan told Speedcafe.com.

“More speed can be found if I had the track 100 percent to myself and didn’t have to be worried about traffic from both directions. Also, a few different lines may shave a few seconds off. 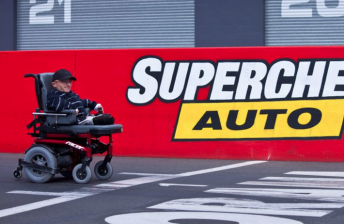 Cormick on pole, ahead of his record lap time

“I know that I hugged the inside of Griffin’s Bend and then drifted out wide on the run up to The Cutting. This probably wasn’t the quickest way through that section as the road is heavily cambered there, plus your climbing the whole time.

“I reckon plonking myself in the middle of the road there (on the crown) may give me some more speed, but we’re not talking huge amounts. There’s a few other places to fix as well. I reckon you may be able to get down to 25min-flat but not much more, not in this chair anyway.”

Thanks to his dad’s passion for the sport, Cormick was bitten by the racing bug early in his life. The Sydneysider grew up around Amaroo Park and cut many laps around the now defunct circuit.

“When I told Brocky, all he could say was that I was a bloody lunatic! On such a hot lap, Cormick barely had time to take in the view from the top of the mountain

“Since then, I’ve also lapped the Adelaide Street Circuit (18m21s) and of course Bathurst. The first Bathurst attempt in 2007 was done to mark the one year anniversary of Brock’s passing. This week’s attempt was also done on Brock’s anniversary, the fifth year. He would have a grin from ear to ear if he knew what I was up to …”

Confined to a wheel chair, Cormick doesn’t just spend his time following motorsport – he gets involved.

Cormick uses his artistic prowess to design race car liveries, having penned one of the Jim Beam Racing Falcons in the late 2000s.

He will be at Mount Panorama this year to watch the Saturday’s top 10 shootout (for the Supercheap Auto Bathurst 1000), plus support the car he designed.

“I’m hoping to be at Bathurst for shoot-out day,” he said.

“I want to get up there to see the Fujitsu race as I’ve done the Solo Racing livery for Aaron McGill. It’s always cool to see one of your designs racing around the Mountain!”

Now, Cormick will concentrate on how he will beat his new lap record, and like all of the fastest men around Mount Panorama, he has some sponsors to thank.

“Racer Incorporated is a clothing company and they supply me with some gear,” he said.

“I ran some of their stickers on my chair, and they make some cool apparel, so that’s probably why I was so fast!”