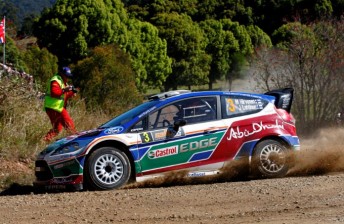 Mikko Hirvonen appears to be on his way to victory

Mikko Hirvonen has taken the lead of Rally Australia heading into the final stage after both the Ford and Citroen factory teams played tactics in Special Stage 25.

As expected, erstwhile leader Jari-Matti Latvala stopped briefly in SS25 to ensure that his team-mate Hirvonen – who is still in championship contention – will gain the 25 points for victory.

The change sets up a third consecutive Rally Australia victory for Hirvonen, who took out the final event to be held in Perth in 2006 in addition to the Kingscliff-based rally two years ago.

Citroen has also decided to swap the order of its drivers, with 10th placed Sebastien Ogier checking in late to the start of SS25 in order to allow his championship leading team-mate Sebatien Loeb to assume the final point.

The decision marks the end of a season-long fight between the Citroen team-mates, with Ogier having entered the weekend just 25 points behind, before looking a possibility to take the points lead after Loeb’s crash on Friday.

The rally’s final stage, referred to as the Power Stage, will be televised on Network 10 this afternoon, with points awarded to the three fastest men over the 4.58km test.

New Zealand’s Hayden Paddon continues to lead the Production Car World Championship contenders, and will look to wrap up the title this afternoon.