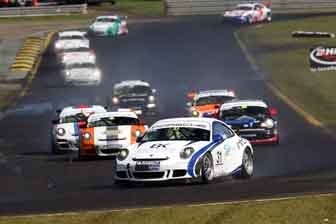 Trende was again leading the field in Race 3 when Saturday victor Rose left the circuit at the high-speed turn eight, making heavy contact with the armco barrier. Rose was uninjured from the accident, however his Porsche 996 Cup car suffered substantial damage.

The race finished under Safety Car and Trende claimed his second race victory of the weekend, along with the 997 Cup class and outright victory from the Sandown round.

“I’m very happy with the round win,” said Trende.

“It was a great weekend, the car was fantastic and I managed to keep it on the track for all three races.

“I wasn’t surprised about my speed, I put it on pole position  and outright speed hasn’t really been an issue; the issue has been with consistency, which is where I’ve needed to improve.

“This result definitely gives me confidence for Phillip Island given my speed and consistency this weekend.”

Meanwhile, 996 Cup Class winner Terry Knight was pleased with the class win, but rued the fact it came at the expense of fellow competitor Rose.

“I certainly wasn’t up to Kane’s pace but I’m happy to mix it with Roger Lago on Saturday and beat him home legitimately for the first time this year; that was a big buzz.

“I definitely didn’t expect this win before the weekend. I thought I was going to stay close to the lead pack and watch Kane leading them all home because he’s a great driver.

“Like a few of us, he’s light on budget so you’ll see the good aspects of this category come out in the coming weeks when everyone will try to help out to get Kane back on the track.”

The round results leave Lago with a commanding lead in the 997 Cup Class while Terry Knight has extended his points gap at the top of the 996 Cup Class.

The final round of the 2011 Porsche GT3 Cup Challenge Australia season will be held at Phillip Island on November 5-6.