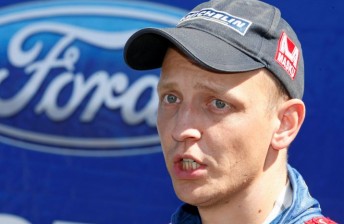 Latvala had entered the day 22.6s ahead of team-mate Hirvonen, but slowed considerably on the penultimate stage to allow his championship contending team-mate to take the victory.

Hirvonen now sits just 15 points behind Citroen’s Sebastien Loeb in the Drivers’ Championship standings, and was quick to pay tribute to Latvala’s efforts after the rally’s completion.

“At the start of the season we agreed to help each other, and Jari-Matti showed today what a team player he is,” said Hirvonen.

“He had a great opportunity to win this rally but he gave it up to help me in my fight for the championship and I appreciate that. Two years ago I lost the world title by a single point, so every point counts.”

Latvala, who early indicated that he expected to be asked to help Hirvonen following the incidents involving Citroen team-mates Loeb and Sebastien Ogier on Friday, said his turn of speed this weekend is a major confidence boost.

“I know I had the speed to win here and that’s good for my confidence, but I wanted to support Mikko,” said Latvala of the result.

“It’s about attitude and how we handle it. Our challenge for the manufacturers’ title suffered from my mistakes and this was my opportunity to pay something back. We have a good spirit inside Ford and you can’t win without that.

“I want to be in this team and we all work well together. I had a passion to win here, but I had to look at the bigger picture and this was the time to support Mikko.

“Yesterday morning was the key time in the rally. We punched in a series of fastest times and I knew then that we could both control the result.”

Citroen also deployed team orders in the dying stages of the rally – asking Ogier to lose in excess of 10 minutes over the final two stages to allow Loeb to take the final championship point.