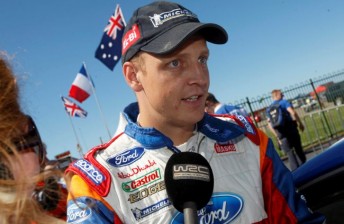 Jari-Matti Latvala, who handed his championship-contending team-mate the lead of the rally on the penultimate stage, sealed a one-two finish for the Ford Abu Dhabi World Rally Team after finishing 1.2s behind Loeb in the Power Stage.

Completing a fairytale rally for the team, Ford’s third factory driver Khalid Al Qassimi improved on his previous highest overall finish to round out the top five.

Sixth outright for Hayden Paddon was more than enough to take the Production Car World Rally Championship. The New Zealander finished the rally 1:32s ahead of nearest Production Car challenger Michal Kosciuszko, while Ukrainian Oleksandr Saliuk and Mexican Benito Guerra were eigth and ninth respectively in their Mitsubishi Lancers.

Following their crashes on Friday, the Citroens of Loeb and Sebastien Ogier recovered to finish the rally 10th and 11th.

The Citroen team’s insistence that Loeb should finish ahead of his younger team-mate saw Ogier slow in the Power Stage – giving away a total of 10 minutes on the final two stages.

Loeb continues to lead the World Rally Championship for Drivers’ with just three rallies remaining, albeit with a reduced 15 point margin back to Hirvonen.