Both Aussies in SGP Final

Both Aussies in SGP Final 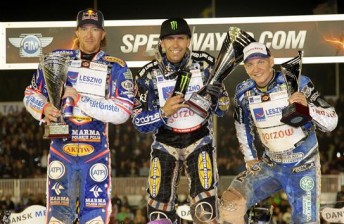 Australia’s Jason Crump and Chris Holder have ended the Nordic Grand Prix at Vojens in second and fourth respectively as American star, Greg Hancock is on the verge of wrapping up his second World Speedway Championship.

Hancock took victory in what has been undoubtedly the 41-year-old’s finest season of his career. He now sits 31 points ahead at the top of the World Championship – and if he can maintain a 25 point buffer and the close of the next Grand Prix, he will be crowned World Champion elect with one round to go.

Second was a fantastic bounceback for Crump – and fourth for Holder with an 11 point total shows great improvement over recent events. He was unlucky not to stand on the podium – pipped by Swede, Freddie Lindgren. Crump – who is now fourth in World Championship standings is virtually assured of direct qualification for the 2012 Championship.

Holder on the other hand is in a battle for his Speedway Grand Prix life. He is in equal sixth on 88 points with Emil Sayfutdinov, with Kennth Bjerre occupying the bubble spot on 85. Ninth is unpredictable triple World Champion, Nicki Pedersen on 75. Whilst it may seem unlikely, Pedersen is liable to come out and win the remaining two Grands Prix to elevate himself into the top eight.

Hancock’s Championship nemesis – Jaroslaw Hampel – had an off night, scoring just eight points for the meeting. He is aiming to keep the Championship alive until the final round, when it will be conducted in Poland in front of a loyal and vocal crowd at Gorzow.

The penultimate round of the World Championship will be conducted in two weeks in Croatia.