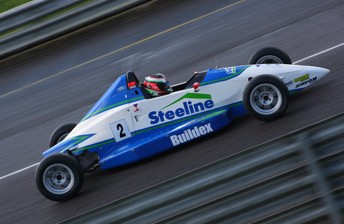 Nick Foster has taken victory in the opening race of Round 5 of the Australian Formula Ford Championship at Sandown Raceway today.

The Steeline Mygale driver’s win narrowed the gap to championship leader and today’s pole-sitter Cameron Waters who was involved in an incident. Waters dropped back down the field but fought back well to take fourth place.

Foster, part of the final four contestants in the Shannons Showroom Showdown reality TV program, was pleased with his victory.

“After the restart (for a mid-race Safety Car), I put my head down and was able to make a gap,” Foster said.

“I feel that I do my best driving out in front, so I felt pretty comfortable towards the finish.
“Hopefully the weather holds off again for tomorrow’s races.”

After leading early, Gary Jacobson came through for his best result of the season in second, fighting back after being held wide on the restart.

“I made a pretty good start from the greasy part of the track, and I managed to get in a good groove with Nick (Foster) in the early running, and made it to the lead,” Jacobson said.

“On the restart I hung myself out wide, and had to fight very hard to get second at the finish.”
In third place at the chequered flag was Jack LeBrocq, who had his work cut out for himself after qualifying on the last row of the grid following on from wet qualifying session, where timing proved critical.

“It was fairly full-on, racing from the back of the pack was a hard thing to do,” LeBrocq said.
“I’m very happy to finish in third and salvage some championship points.”

Round 5 of the series continues with Races 2 and 3 tomorrow at Sandown Raceway as part of the Shannons Nationals.